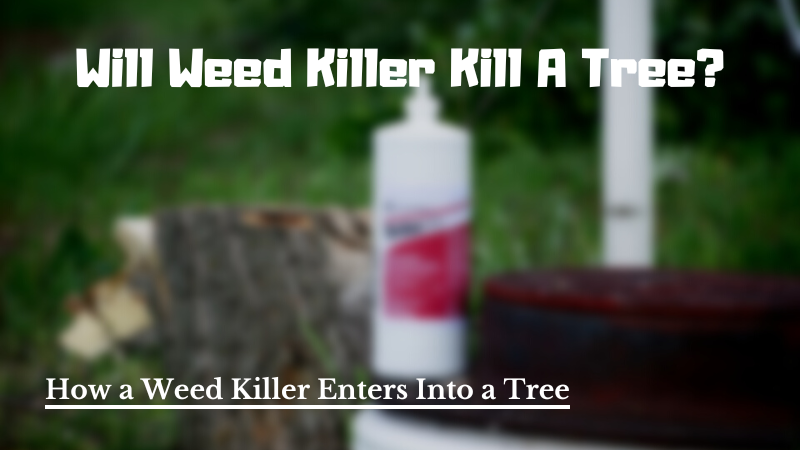 Will weed killer kill a tree?

Yes, weed killers are capable of killing trees. However, they can’t kill massive trees, which are more than 4 feet tall. But, giant trees can be destroyed if you use extra chemicals along with weed killers.

Less than 4 feet of trees are prone to die if you spray the solution on their leaves. We use weed killers to kill weeds. But sometimes, we end up harming other plants or even trees. Weed killers are of two types:

If you are interested in learning more precise details about “Will weed killer kill a tree?” read this post until we finish.

Will Weed Killer Kill A Tree? 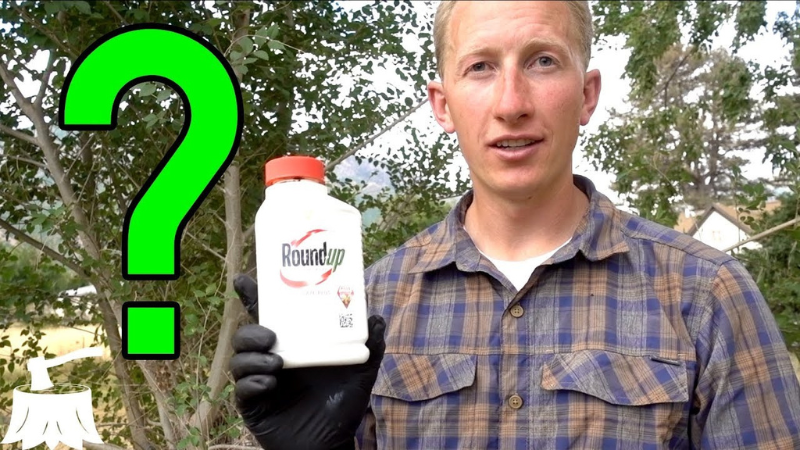 Do you think you can kill a tree using a weed killer such as Roundup? A gardener shared his practical experience with us. He first tried to kill a bulky tree by applying spray on the tree leaves. He, in fact, drilled some holes inside the tree body and filled them with the weed killer. However, he failed to kill it. The tree recovered gradually.

So, why did the weedkiller fail to kill the tree? It happened for two reasons.

However, he also tried another tree, which is less than 4 feet tall and has a weak root system. Finally, he succeeded in killing the tree. Now, you know why this tree was easy to kill while the other one was not. 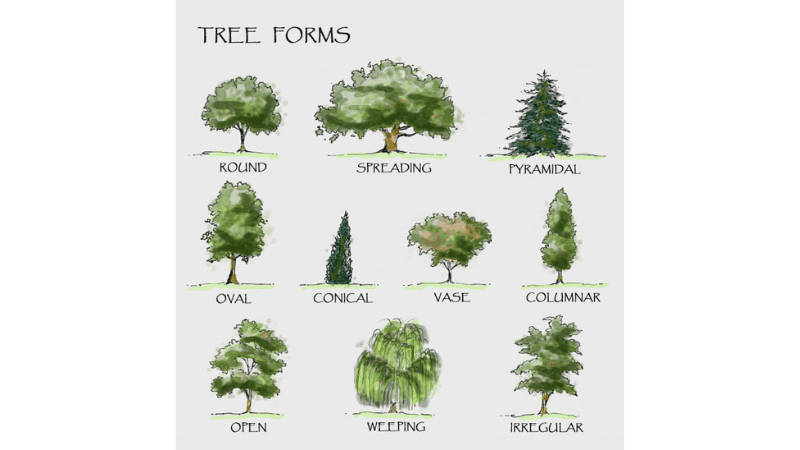 Killing trees using weed killers depends on the tree type. Some trees may not die even after heavy use of weed killers, while others may die with a bit of use.

For example, trees like pine trees, palm trees, etc., are easy to kill with normal usage of weed killers. These trees have a considerable height and robust root system. But you can still kill them since they are sensitive to weed killers and other similar chemicals. You don’t need to use any extra chemicals to kill them. The weed killer itself is enough!

How a Weed Killer Enters Into a Tree? 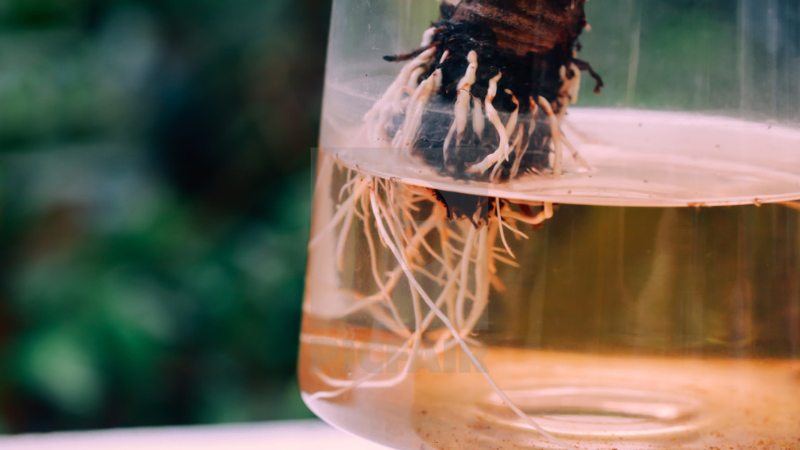 Some powerful weed killers have a potent formula that can kill trees and even shrubs. Here are a few of them: 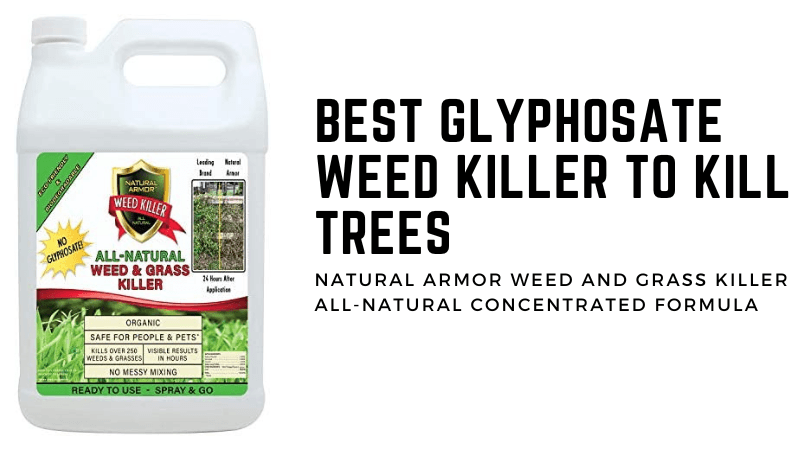 Many weed killers, such as Roundup, HDX, etc., contain glyphosate as their primary ingredient. Spraying this type of solution on tree leaves, root systems, or bark may kill the tree. 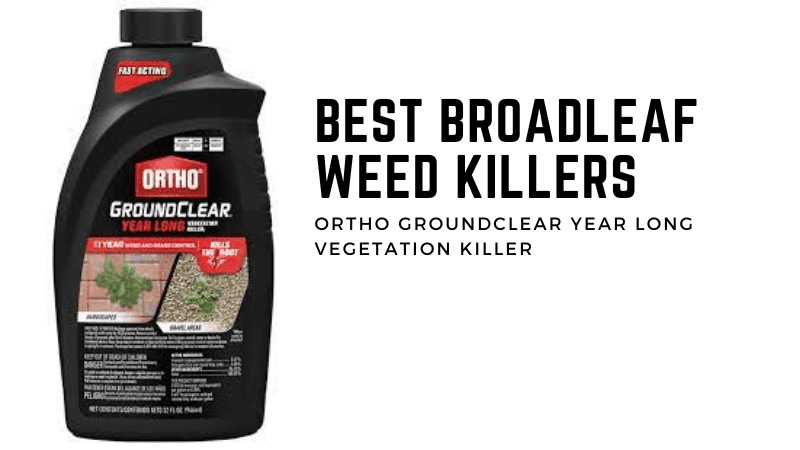 Our gardens often are full of broadleaf weeds. This type of weed killer is specially made to kill these weeds. They are lawn-safe too.

However, most of these weed killers don’t have the ability to distinguish weeds, shrubs, and trees separately. Hence, you may end up destroying your beautiful trees along with harmful weeds.

Be cautious while applying it. Make sure trees and shrubs are not harmed while using the solution to the weeds. 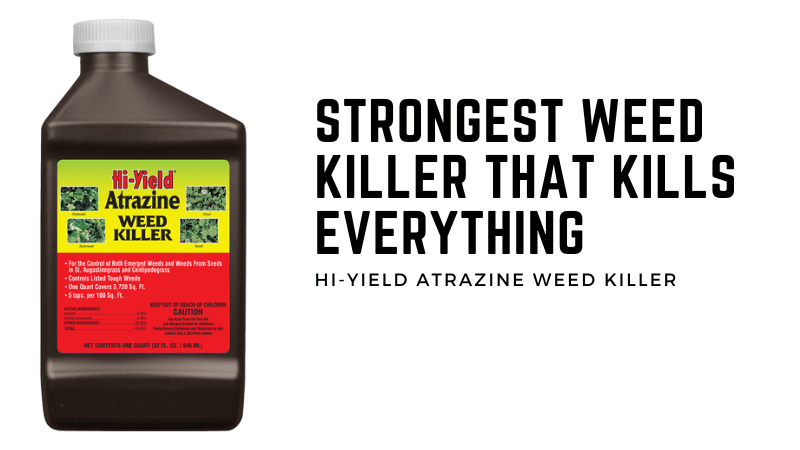 Atrazine is a weed killer that is used on golf courses, industrial sites, and residential lawns. It has the ability to kill plants that are not in the desired location and help keep them from growing back.

The EPA has found that it may have similar effects on humans. They looked at levels of exposure to atrazine and how it might affect reproductive hormones in people. One of their findings showed that women who have higher levels of atrazine exposure have an increased risk for ovarian cancer.

This type of weed killer has a unique characteristic. They make their way through soils and enter into plants’ root systems. It poses a severe risk of killing trees though it is not directly the trees’ bodies.

How To Kill Weed Trees With Roundup? 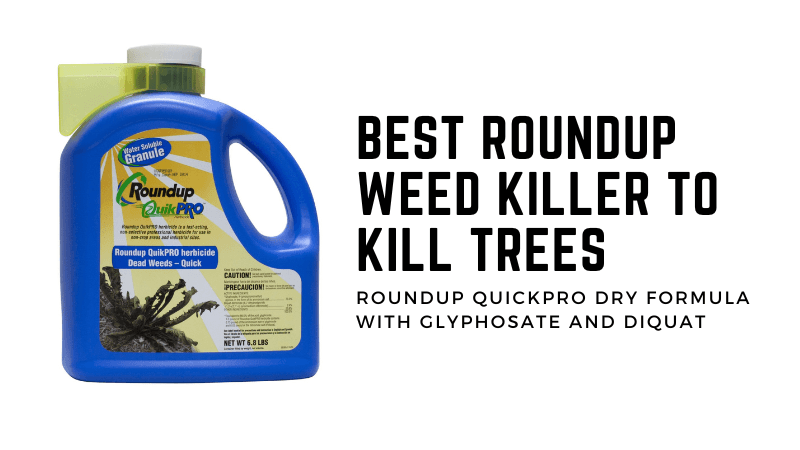 Do you have massive weeds on your lawn? So, are you Wondering how to kill these weed trees with a quick yet easy-proven method?

Killing weeds shouldn’t be a hassle. Roundup and other high-quality weed killers can effectively deal with them within a short time. You just mix the solution in a gallon sprayer and apply them directly on their leaves and root area. They are supposed to die within a few days.

Make sure you follow the manufacturer’s instructions correctly for the ideal amount. If the weeds are super strong than typical weeds, slightly increase the dose. But avoid spraying on the other plants and large trees’ roots. Doing all these things should not take more than one hour, including the preparation. Simple!

Yes, a weed killer can kill a tree stump. However, many of us think that only trees are what we see above the ground. But, we forget their root also has a life. 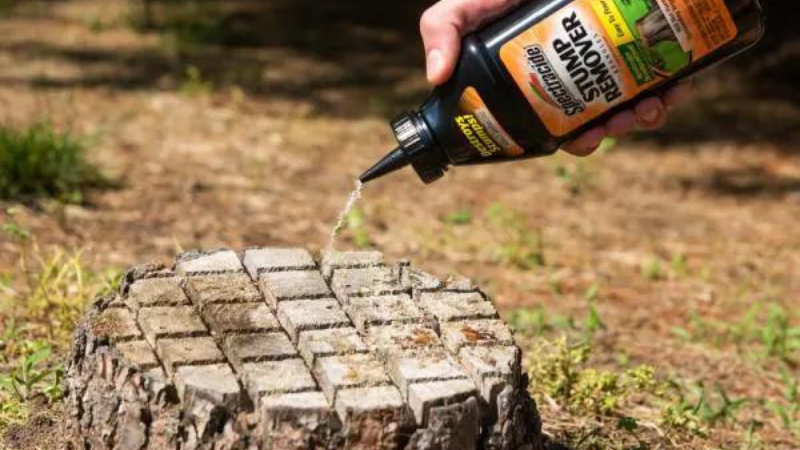 It happened thousands of times for many people that they cut down whole trees except the below portion —which is attached to the root system. And the tree had regrown again. 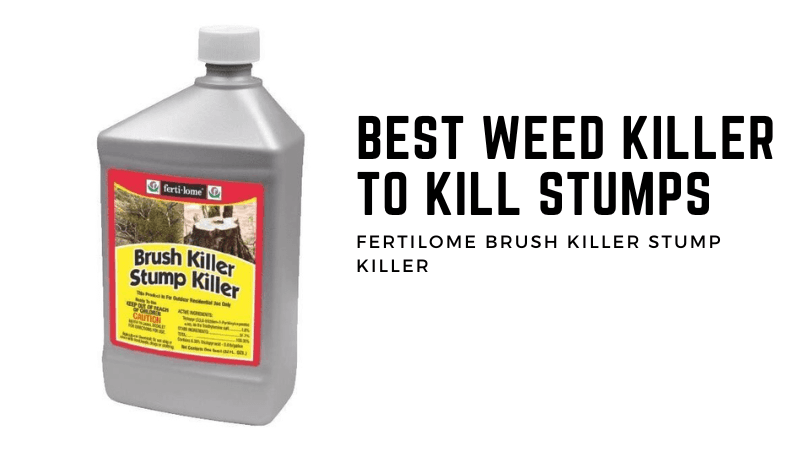 This example is especially applicable to trees that have super strong stumps. So, a typical weed killer won’t be able to kill a tree stump. Instead, you need to use a tree killer or any other chemical that kills trees from their roots.

Can You Kill Grass Around A Tree With Roundup Without Killing The Tree?

Yes, you can kill grass with the help of quality weed killers without harming or killing the tree. However, the process involves a lot of carefulness. A single mistake may end up killing the tree.

Read More – How Do You Kill Weeds Without Killing Trees?

The grass should not be already covered in all areas of your tree. Otherwise, it will be hard to control. Before spraying the weed killer around the grass, protect the tree surrounding with a hardboard. This will prevent the spray from touching the lower part of the tree. 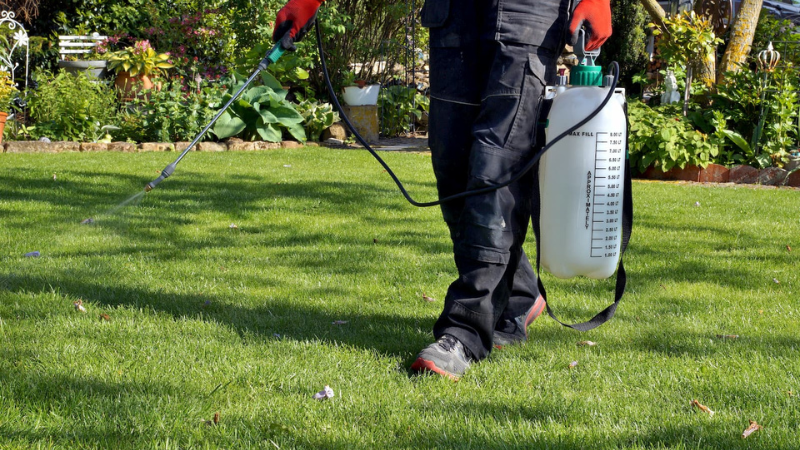 Since grasses are not exceptionally tall, you don’t need to cover more than 1-2 feet. Focus on spraying the solution on the grass. Applying two times each year will help you to control the growth of weed easily.

Can You Use Weed Killers Around Trees?

If you don’t directly spray weed killers on the tree surfaces, it is safe to use. Using weedkillers around trees is not supposed to cause any problems unless they contact the tree root system, leaves, and body. 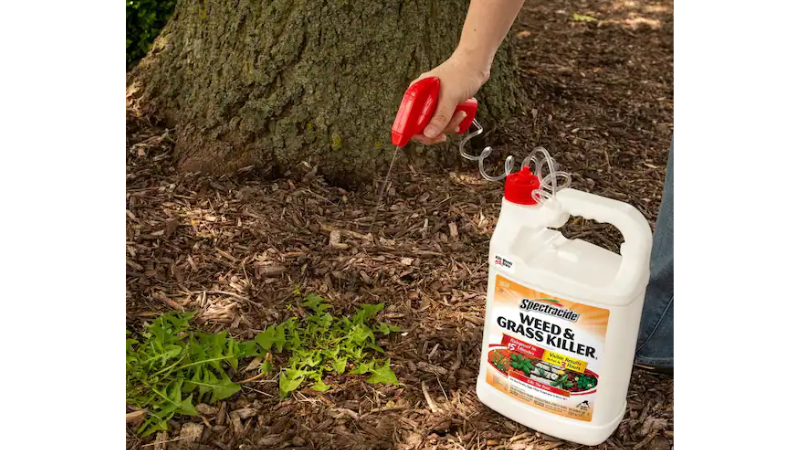 Also, make sure the solution doesn’t come close to the tree through rain or rain.

So, your trees will remain safe as long as you keep applying the solution carefully. Extra caution is necessary for small and medium-sized trees as they are more prone to getting damaged.

Will Weed Killer Kill A Tree If It Gets On The Trunk?

No, even if you accidentally apply a weed killer on a tree trunk, it is not supposed to kill the tree. Trees have an outer protective layer named “bark.” It keeps the tree safe from different substances. 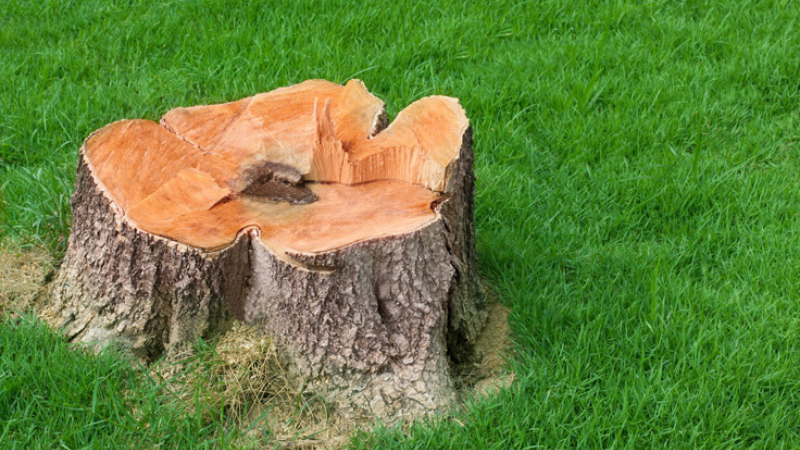 However, if the tree is small and doesn’t become mature enough yet, a weed killer may kill it. The situation is still rare, though. But they are likely to have minor or several damages due to the solution if not destroyed.

On the contrary, for large, mature trees, there is no chance of killing the tree. As we mentioned earlier, you can only kill them when you use extra chemicals along with a powerful weed killer.

We hope that you got the answer to “Will Weed Killer Kill A Tree?” However, while weed killers are often touted as a convenient and safe way to clear weeds from your garden, they can also have detrimental effects on what you may not see. The article concludes with the idea that if someone is not careful, then weed killers can be deadly for the environment and should be used only as a last resort. We also warn against using weed killers in areas where children play.